We Tried It: The Impossible Whopper

The Impossible Whopper: Burger King’s take on the meatless burger experience. As the Internet explodes with mixed reviews, we decided it was time to see for ourselves: Is it gross? Delicious? Just “okay”? And, most importantly, does it taste like a real Whopper?
Our experiment was decidedly simple. Taste a few bites of each unmarked burger, with a little palate cleanse in between, and quietly make a guess as to which option was real meat. I took the tallies, and they do not lie: only 2 out of 10 people surveyed guessed that the Impossible Whopper was real meat. But that doesn’t mean it’s all bad….

“I thought the Impossible Burger was pretty good. I was pretty confident that [Option] B was the real burger when I tried it, because, yeah—I know my burgers. But it was still pretty good. A nice option for those who aren’t meat-eaters. I could tell because of the extra char. That really gave it away for me. Think they may be compensating for some flavor there.” – Ali Waters, Graphic Designer

Our taste testers were mostly agreed on which was the real Whopper, but still had a few extra words to share….
“Option A is definitely the fake one. And it’s the better one,” – Adam Noone, Motion Designer
“Yeah, it still tasted like a burger. Well, it didn’t not taste like a burger. But having both, you could tell.” – Sarah Seamonson, Graphic Designer
“I just tried to judge it off taste. I could taste a difference between the two, but I couldn’t tell which one was which. I think I would eat either of them. Based on the small amount I ate, I’d say they’re pretty even.” – Joe Zeoli, Director of Technology

“From the visual presentation of it, I was impressed…I would say, for the taste, a Whopper is a hard thing to judge on because they smother it with mayonnaise and tomato, so it hides any kind of nuance to the taste. If it was on a burger with limited toppings, I think you could tell the difference.” – Kevin Hammond, Creative Director

So, why the hype?

With a product deemed by some to be better than a real Whopper, or at least “pretty even” with the real thing…it’s not a total wash. Hooray for you, Burger King. But it still begs the question: why the sudden excitement about this particular veggie burger (as well as many others being pushed out by fast food chains)? BK already had a veggie burger on the market.
As TheTakeout.com pointed out, “Breaking through to the meat-free crowd has been the holy grail of fast food chains for decades. Any vegetarian entrees they test-marketed were treated as novelty and didn’t stay on the menu for long. Marketers can postmortem and come up with a hundred reasons why those failed, but the Occam’s razor explanation: None tasted any good.”
To be fair, the old veggie burgers aren’t that bad. But they certainly don’t taste much like the real thing. And that is the main difference between earlier options (BK’s OG veggie burger is made by MorningStar and tastes nothing like meat). What we’re dealing with now is a new level of plant matter masquerading as meat. Lab-created cell-based “meats” that are scientifically crafted to simulate the texture and taste of meat like never before.

Noting the current proliferation of “Meat 2.0” popping up on fast food menus (including KFC’s recent test-market sellout, a Beyond “chicken” sandwich, and White Castle’s Impossible Sliders), I decided to look into why so many marketing dollars are suddenly being poured into these extra-realistic fake meats.

Upon first impression, it would appear that BK is meeting the demands of a growing vegetarian demographic. But when I looked into the stats on it, I discovered that the vegetarian population has remained relatively unchanged for quite a while. According to the Washington Post, the number of vegetarians in the US hasn’t been growing at a heightened rate, hovering around 5% over the past two decades.
What has increased is the volume of meatless options, with companies clamoring to stake their share of an $895M market. In fact, the number of vegetarian options more than doubled in size not too long ago: According to Mintel, “12% of global food and drink products launched in 2013 carried a vegetarian claim, up from 6% in 2009.” Which made me wonder again — if there aren’t more vegetarians — why?
It wasn’t until I scrolled deeper into this study and reflected on my own reaction to the Impossible Whopper that it finally clicked.

Theory: Meat 2.0 targets those who are reducing their meat consumption more so than true vegetarians.

Confession: I think ground beef is gross. I couldn’t fully participate in the taste test because I haven’t eaten red meat for years. However, I did try the Impossible Whopper. And I wasn’t a big fan. Namely because it does taste a lot like real beef. (Apparently I’m not the only one to have this reaction.)
Now, this is a bit of conjecture, as I couldn’t find any studies on it, but I have heard more than one vegetarian describe meat (and its smell) as “disgusting.” I think this may be more common with those who have been vegetarian for some time. It’s less likely that people who are in the process of trying to cut animal products from their diet feel the same way.
And when I put that bit of anecdotal knowledge together with the stats I found on vegetarians vs. those reducing the amount of meat they consume, I realized something: The recent wave of realistic, meat-like options isn’t a push to target the true vegetarian market. Maybe it’s actually a push for “flexitarians.”
Never heard of ’em? Well… You may be one.
In the same article from Mintel, surveys pointed to growth in the “flexitarian” and “climatarian” populations — essentially, people who are consciously consuming less meat than before, but without removing it entirely from their diets.
Laura Jones, Global Food Science Analyst at Mintel, said:
“Globally, the outlook for the meat alternative market is positive and will continue to be driven by an emerging consumer trend towards meat reduction on a part-time basis, also called flexitarianism, entailing increased consumption of plant-based foods without completely cutting out meat. “
An October 2018 article from the New York Post confirms this, stating that one third of Americans consider themselves “flexitarian” based on survey questions. In fact, the reduction of animal product consumption has been a steady trend for the past five years:
“In the last five years, survey respondents say they have really reduced the amount of meat and dairy they consume. In fact, 37 percent say they have reduced how much meat they consume while another 33 percent say they have reduced the amount of dairy they eat.”
Despite the release of myriad documentaries on the perils of meat for the body and environment, habits are hard to change. People are trying to reduce their meat intake. But they still miss the taste of meat.
So, voila! We now have fake chicken that actually… tastes like chicken. Impossible burgers making the impossible possible (or, at least, plausible). This may perhaps explain why fast food chains are jumping on the lab-created meat wagon so emphatically these days — to attract the growing flexitarian crowd. It’s a pet theory at this point — difficult to confirm without calling up some fast-food CMOs — but the research appears to support it.
So, to all of you struggling to *partially* give up meat: struggle no more. Science is well on its way to perfecting the realest-tasting fake thing. As for me, I’ll be sticking to chicken fries and old-school veggie burgers, given the option. The new stuff is already just a little too real for my taste.

Gary is a self-proclaimed “creative misfit” in that he doesn’t fit neatly into any one compartment or department. He’s an insight spotter, brand strategist, writer, content creator, creative facilitator, product innovator and a nationally syndicated cartoonist. 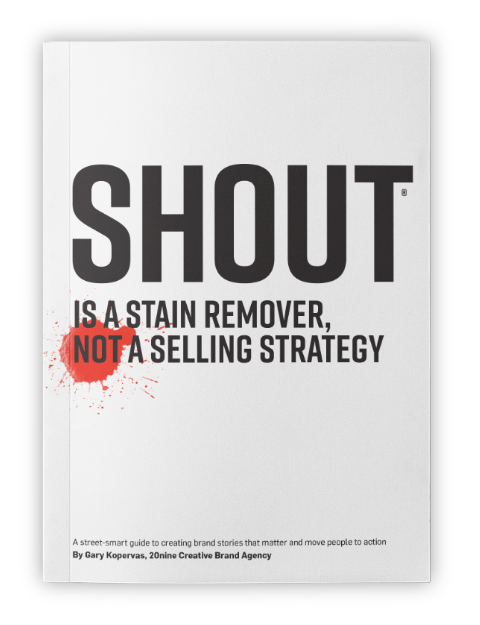 You’re nobody ’til somebody knows your story. But not everyone knows how to tell their story. Check out Shout is a stain remover, Not a selling strategy to see 20nine’s approach to storytelling and how you can apply our actionable strategies to your brand.